Masterpost: Prime in the Benedictine Office 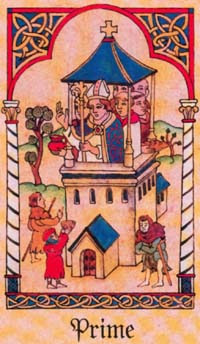 
Prime, which literally means the first hour after sunrise, is a very important hour in the Benedictine Office, not least by virtue of the psalms set for it, which include Psalms 1 and 2, regarded as an introduction to the entire psalter.

Prime has a very simple structure: opening prayer, hymn, three (four on Sunday) psalms with antiphon, and closing prayers.  The hymn and prayers are the same everyday, and give the hour a strong focus on preparing for the day.

In monastic practice, it is normally immediately followed by Chapter, which includes the reading of the martyrology and Rule, prayers for the Dead, and prayers to be said before work, which reinforces this focus.

Prime has no fixed or repeated psalms - instead, St Benedict uses the Psalms 1 to 19 (leaving out Psalms 3-5), and adding in four stanzas of Psalm 118 on Sunday.  All the same, the hour does very much feature some very important and often repeated ideas that are closely connected to themes in the Benedictine Rule.

From the Incarnation to the Resurrection

Sunday and Monday Prime echo each other closely: both begin on a beatitude (Beatus vir/Beati immaculati), and the opening verses of both psalms are very similar in content.

These two psalms have often been interpreted in the Christian tradition as signalling the progression from Christ as the blessed man of Psalm 1, incarnated (see especially Psalm 2) to teach us the path to imitate; to the many following him into heaven, the way reopened by the Resurrection (see for example the psalm commentaries of St Augustine).

St Benedict presumably had this in mind, since Monday in his Office has many allusions to the Incarnation, while Sunday is always a celebration of the Resurrection in his psalm schema.

Christ, fulfilment of the law

One of the most important themes of the Fathers was the idea of Christ as the fulfilment of the law.   And Prime features all three of the 'Torah' or law psalms of the psalter.

Psalm 1 portrays the good or happy man as the person who meditates on the law day and night; while Psalm 18 instructs us that 'the law of the Lord is perfect, converting souls'.  And of course, Psalm 118, the longest in the psalter, is an extended meditation on the law of the Lord.  Thus we have a symbolic three days (Saturday, Sunday and Monday) in which the perfection (Trinity) of the law is praised.

A nice example of how this theme plays out in Patristic Scriptural exegesis is provided by St Ambrose's comments on why the first miracles recorded in St Luke's Gospel are of Christ healing on the Sabbath.  St Ambrose comments that:


"That the Lord began to heal on the Sabbath-day showeth in a figure how that the new creation beginneth where the old creation ended.

It showeth, moreover, that the Son of God, Who is come not to destroy the law but to fulfil the law, is not under the law, but above the law.

Neither was it by the law, but by the Word, that the world was created, as it is written "By the Word of the Lord were the heavens made." [Sunday, or Day 1 of creation]

The law, then, is not destroyed, but fulfilled, in the Redemption of fallen man. Whence also the Apostle saith: "Put off, concerning the former conversation, the old man, which is corrupt according to the deceitful lusts and be renewed in the spirit of your mind and put on the new man, which after God is created in righteousness and true holiness."

Our hymn of praise to the law at Prime then, starts, as St Ambrose suggests on the Sabbath, to symbolise that the new creation starts where the old ends.

It continues on the 'eighth day', that celebrates the Resurrection and our redemption in Psalm 118.

And is repeated a third time on Monday, in Psalm 1, a day I suggest that St Benedict makes a celebration of the Incarnation (most of the psalms of Matins are clearly linked to this theme by the patristic commentaries, indeed virtually the whole of the Benedictus and Magnificat can be reconstructed from lines in these psalms; moreover, Psalm 2 at Prime gives us the Introit verse for the Midnight Mass of Christmas).

The problem of atheism

The psalms of Prime through the week also ponder the problem of the opposite of the man who follows the law, namely the man who acts as if God does not exist ('the fool says in his heart, there is no God' of Psalm 13 for instance). Sinners don't seem to realise, the psalmist suggests, that in fact God is looking down from heaven to see if anyone is seeking after God (Psalm 13).  Several of these  psalms ask why the evil seem to thrive, while the good suffer.

There are key messages for us in these psalms, echoed in many places in the Rule, about the importance of mindfulness of God, continued prayer for his assistance, and perseverance in the face of difficulties.

The psalms of Prime also, though, point us to the promise of Christ's ultimate victory as a response to the problem of evil in the world.  In particular, on both Saturday and Monday we are also presented, in the following psalm, with the image of Christ the victorious king.


"Psalm 19 [18] is unique because of  its strong emphasis on wisdom.  Its role may be better understood when examined in light of Psalm 20 [19].  Together these two psalms - situated at the centre of book I - mirror Psalms 1 and 2.  Psalm 19 exalts the law of the Lord, the source of wisdom: "The law of the Lord is perfect, reviving the soul: the testimony of the Lord is sure, making wise the simple" (v. 7).  Them Psalm 20 evokes Psalm 2, speaking of the Lord's deliverance of the Davidic king from his enemies, sending support from Zion.  Thus, as in Psalms 1 and 2, wisdom is connected with the victorious Davidic king."

A similar point can be made on the similarities in content between these two sets of psalms, and the first four stanzas of Psalm 118 St Benedict uses at Sunday Prime.  Both Sunday Prime and Monday, for example, begin with a beatitude, praise the importance of the law, call for or prophesy the destruction of enemies and point to the victory 'over princes' (Ps 2; Ps 118, esp 21-23).


Alpha and Omega, Aleph and Taw?

There are some possible numerological connections to these themes as well.

The minor hours in the Office, all have three psalms each day, which several of the Fathers suggest is in honour of the Trinity, making in total 21 psalms said at these hours each week.

St Benedict, though, starts Prime each week on Sunday with four stanzas of Psalm 118, taking the number up to 22.

Why is this significant?  The answer is that the Hebrew alphabet has 22 letters, so the number of psalms marks one for each letter.

Moreover, Psalm 118 has 22 stanzas, each labelled with a letter of the Hebrew alphabet, so Sunday Prime starts with aleph, beth, ghimel and daleth.

So the extra 'psalm' is perhaps a piece of numerical symbolism signalling a connection to the Christ as the fulfillment of the law theme, mimicking the Greek, 'I am the alpha and omega'.

Posts on the psalms of Prime


The liturgical genius of St Benedict: the puzzle of Prime

Psalm 15 - short summaries
Psalm 15 in the context of Tenebrae