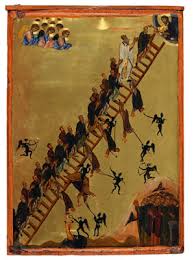 St Jerome, in his notes on the first of the Gradual Psalms says:


Let anyone who is still on the lowest step fix his gaze on the highest step, the fifteenth.

And I'm going to use that as my justification to jump to the last psalm of the group, Psalm 133, said at Compline each night in the Benedictine Office, next (though I will come back to the rest of the set after I have looked at this one).

The last of the psalms of ascent, Psalm 133 is very short.  But it can be read quite a number of different ways, making it a very rich source indeed for our meditation.


The literal interpretation: worship in the night

The first interpretation focuses on the literal meaning of the words and their historical context.

If you read many modern commentaries, you will get variants on the idea that this verse is literally an invitation to worship God: in its original context, the pilgrims have finally arrived in Jerusalem, and enter the Temple in the evening.  The pilgrims call out to the priests and Levites to obtain a blessing from them to mark the occasion (v1-3).  The priests and Levites, then reply (v4).

In the context of its ancient Jewish Temple liturgy, some suggest that this psalm marks a kind of handover point: it would have been said as the laity left the inner Temple at night, with the priests remaining behind to keep the night vigil.

In the context of Compline, then. the psalm directs us to stand together one last time before he go to bed, to give thanks God for all the blessings we have received during the day, and asking him to bless our rest, symbolised by the night.

This literal  explanation is fine as far as it goes, but there is, I think, much more spiritual juice to be extracted!

The citadel of virtue

The second interpretation focuses on the idea that this set of psalms represents our step by step progress in climbing the ladder of humility, and thus building a temple within ourselves, a 'citadel of virtue' as several of the Fathers, such as SS Ambrose, Cassian, Gregory and Bede put it.

St Augustine, for example, interprets the reference to the courts of the house of God as having achieved the enlargement of heart that St Benedict speaks of in his Rule as the measure of perfection:


Courts mean the wider spaces of a house. He who stands in the courts is not straitened, is not confined, in some fashion is enlarged. Remain in this enlargement, and you can love your enemy, because you love not things in which an enemy could straiten you. How can you be understood to stand in the courts? Stand in charity, and you stand in the courts. Breadth lies in charity, straitness in hatred.

It is only when we have reached this highest level of the ascent, when we can truly claim to be servants of God, witnessing to his goodness (blessing) through our good works, that we can truly worship him.  We lift up our arms to the Lord, Cassiodorus says, 'by means of good works, so that the devil our foe may be overcome by the majesty of heaven'.

Indeed, several of the Fathers point to the story of Moses in the battle against Amalec (Exodus 11) in relation to the idea of lifting up our hands: when Moses arms were held aloft, the Israelites had the advantage, but if he let them down, they lost.  This verse invites us to be co-workers with Christ, St Jerome, argues: by holding up our arms as Christ did on the Cross, we lend our aid in the battle for the world.

In the night then, we can pray freely as our Lord so often did, unencumbered by distractions, enjoying the peace that is the meaning of the word Sion, and that God confers on those who truly seek him.  As St Jerome says:

The temple as a microcosm of heaven?

A third interpretation is that, consistent with the idea of the steps as a variant of Jacob's Ladder, in ascending into the inner courtyard, we have now metaphorically entered heaven.


He who is on the fifteenth step is already in the vestibule of the temple..Consider for a moment how this earthly temple is a figure of the heavenly temple.  'For star differs from star in glory, so also with the resurrection of the dead'.  Happy the man who has merited to be on the fifteenth step in the heavenly Jerusalem and in the temple!  Because that height is so sublime, and is, I think, the place of the apostles and the holy martyrs...

At this happy level, God blesses us with his presence, allowing us into our permanent home, as St Robert Bellarmine puts it:


Now that you have been delivered from all temptations and persecutions, it is time for you to give your whole thoughts to praising God; and, therefore, "bless ye the Lord, all ye servants of the Lord," who now have nothing else to do, but to render him the tribute of everlasting praise and thanks..  you, who have now a permanent house, and no longer, like pilgrims, have to dwell in tents. And, in addition to the house you have, is "a court," so that you cannot but be supremely happy, having a house within, in which to behold God, and a court without, in which to behold his creatures.

In the night of this world

There is, however, a reminder built into this psalm that in reality we are not there quite yet, and that is in the reference to prayer in the night.  St Jerome, for example, argues that night is a reference to this world:

Accordingly, he warns us not to be complacent: those who seem to have attained the height of virtue can still fall, while those who have not yet even started on the ascent may yet have time to make it:

We have though, a helper in this task in Christ:


When Jacob was in flight from his brother...he placed a stone under his head...'He dreamed that a ladder was set up on the ground with its top reaching to heaven; angels were ascending and descending on it...Would you know that the stone that at Jacob's head was Christ, the cornerstone?  The stone which the builders rejected has become the cornerstone.  That is the stone that is called Abenezer in the Book of Kings.  That stone is Christ.  The name Abenezer, moreover, means 'the Stone of Help'. (Jerome, Sermon 46, on Psalm 133)

You can find the next post in this series on the Gradual Psalms here.

For verse by verse notes on Psalm 133: