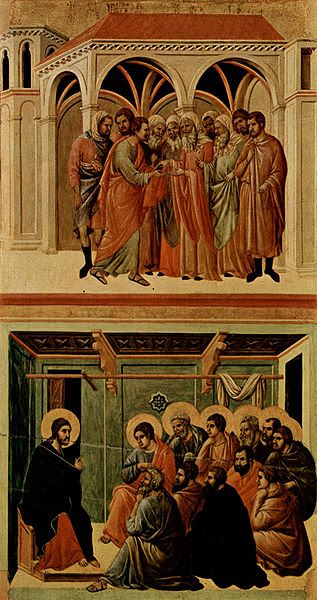 An evil and perverse generation?

The three psalms of Wednesday Prime all plead with God for help in the face of the evil men, and this psalm continues that song of complaint, painting a picture of the evil and perverse generation that Jesus accused those of his time who rejected him of being.  In fact St Thomas Aquinas' commentary on the psalm offers an interpretation of it that neatly fits with my hypothesis on the programmatic nature of the Benedictine Office.  He says:

Now will I arise, says the Lord

This psalm though, unlike the previous two, finally provides God's response.

Psalm 9 pleaded with God to arise and ensure that evil men did not prevail. Psalm 11 provides the reply: "Now I will arise, says the Lord, I will set him in safety'.

What is the safety he offers?  The Fathers and Theologians interpreted this, particularly in the light of the reference in its title to the Octave (Eighth Day), as a reference to the Resurrection.  Cassiodorus, for example, says:

"After the psalmist has condemned those who proposed shedding the Lord's blood, he comes to the second section in which he promises the Lord Saviour's resurrection in the prophetic voice of the Father..."

The next few verses then extol the trustworthiness of God's promises, and the promise of salvation.

The psalm ends though on a rather negative note, lamenting that the number of the wicked circling around him actually seems to have increased.  In the context of the Benedictine Office at least, it is a reminder that we are indeed at Spy Wednesday, not yet at Sunday.

The language of Psalm 11 is, I think, quite hard to penetrate, and this is one of those rare occasions where I think a less literal translation is helpful to look at:

Help, O Lord, for good men have vanished; truth has gone from the sons of men.
Falsehood they speak one to another, with lying lips, with a false heart.
May the Lord destroy all lying lips, the tongue that speaks high-sounding words,
those who say: "Our tongue is our strength; our lips are our own, who is our master?"
"For the poor who are oppressed and the needy who groan I myself will arise," says the Lord,
"I will grant them the salvation for which they thirst."
The words of the Lord are words without alloy, silver from the furnace, seven times refined.
It is you, O Lord, who will take us in your care and protect us for ever from this generation.
See how the wicked prowl on every side, while the worthless are prized highly by the sons of men. (Grail Psalter)

I just want to pick out a few key phrases here.

First, the Latin, in verse 2 says in 'corde et corde', which most older translations render as a double-heart.  But what it is trying to convey is a deceitfulness, or falsity in a person.

Secondly consider that phrase 'quis noster Dóminus est?' (verse 4), which the Grail Psalter translates as 'Who is our master?'.  It is surely the devil who is speaking here.

Finally, unalloyed silver from the furnace, seven times refined (verse 7), plays on the ideas of the number seven as a symbol of purity and perfection.  St Augustine uses this idea extensively in his analysis of the Sermon on the Mount linking this allusion to the beatitudes (the eighth he argues is a restatement of the first), the seven fold operation of the Holy Ghost, and the seven petitions of the Our Father.